Do you have any stand-out moments or events you particularly remember?

I remember my first day in my first store.  I’d shipped my mum over from Northern Ireland for support, and she was frantically packing boxes whilst I was working the till.  It was Good Friday, and I remember looking up and seeing a queue out of the door, and feeling a huge wave of relief. That feeling that you chose your location well, and that everything is going to be okay was just wonderful.  My mum is such an inspiration to me, and having her there just made it a really special moment. She also wraps the most perfect gift-boxes and works for free which is fantastic!

Is there anything customers should look out for in your shop?

What better place to buy Cherry Bakewell Fudge, than in Bakewell town!  We sell small and large gift boxes, which make a great gift alternative to the traditional pudding.  Handmade in Roly’s Fudge Pantry Bakewell!

Roly’s Fudge Pantry Liverpool is in a fantastic Grade 1 listed building.  Keep an eye out for beautiful architectural details, including vaulted red-brick ceilings and even a ceiling hatch to the warehouses above, through which cargo was historically hoisted.

Roly’s Fudge Pantry York is also in a beautiful listed building on what is arguably the best preserved medieval street in the world, the Shambles.  Traditionally a street of butchers’ shops and houses, see if you can spot two original meat hooks suspended from our ceiling. I also read in an article somewhere that at the rear of our exact unit there was once  a stairwell which led to a pub beneath. We’ve looked and looked, but it may have since been filled in. If anyone manages to find it, the first round is on me!

Find out more about Greg’s shops: 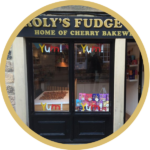 Find out more about Bakewell, the home of traditional flavour Cherry Bakewell since 2014. 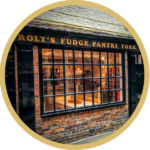 Roly’s Fudge York is the second store opened by Greg. Find out more about this charming shop which opened its doors in 2015. 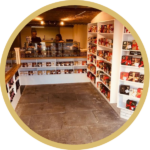 Where do you own your stores?

I’m fairly lucky in that I own three really varied locations!

Bakewell is the ‘Capital of the Peak District’, and being in a national park centre we love our hikers, cyclists and dog walkers.  It definitely has a really outdoorsy feel.

York on the other hand is all about the cobbled streets, the winding alleys and the Minster.  It’s one of the country’s finest cities and I feel really lucky to be part of such a historic and infamous street, the Shambles.

Liverpool is my newest venture.  I’ve always wanted something coastal and being on the Royal Albert Dock is the perfect mix of history, culture and fresh sea air! I love the galleries, the museums and the people.  Oh and folding a fudge on the marble overlooking the water, simply can’t be beaten!

When did you open your Roly’s Fudge pantries?

What did you do before moving to Roly’s?

Now there’s a story!  I actually trained as an architect, but when I graduated and went into practice it wasn’t what I expected.  I suppose the culture didn’t suit me.

I remember swimming laps every morning at my local pool and trying to work out how I could navigate myself into a place where I could control my own career progression and dictate my own earning potential.

I owe everything to Roly’s Fudge for giving me that exact opportunity. I think some things in life are just meant to fall into place.

“Folding a fudge on the marble overlooking the water of the Albert Docks simply can’t be beaten!”

What is your earliest memory of fudge/Roly’s Fudge specifically?

Hands-up, I’m a self confessed comfort eater, and fudge helped me navigate the ups and downs of being a design-student!  If my tutor didn’t like my project, I’d have coffee and fudge by my desk while I reworked it.

However if he DID like my project, fudge was that indulgent reward for a job-well-done.  Either way, a trip to Roly’s Fudge Brighton was involved! A Roly’s Fudge Loyalty Card was forever in my pocket. It was a little ritual that I’ll always remember fondly.

What made you want to own your own pantry?

While studying I also worked in retail for the LEGO group.  We were really big on events, in-store play, building competitions, and at a time when the High Street was really struggling, we consistently had a store full of people.

I loved the buzz that comes with shop work, but I think even then I knew that the future of retail was going to be experience-led. Roly’s was on the same page. Retail theatre engaging all the senses… where do I sign up?

What’s your favourite part of being a Roly’s Fudge franchisee?

I love meeting people with a similar love for the brand.  You really do feel part of a family. Similarly, I love interviewing for my own shop teams, and occasionally you do stumble across that younger version of yourself who has the same buzz for experience-led retail.

I love mentoring those people and seeing them develop. I suppose the most rewarding thing is when you’re able to present opportunities to colleagues who are so engaged with the role and the brand.

“I think some things in life are just meant to fall into place.”

Oh that’s difficult because it keeps changing.  I don’t think you can beat the Salted Maple & Pecan, cut into small cubes, with a coffee in hand after dinner… but I do increasingly find myself pinching a piece of Honeycomb for the drive home!  Perks of the job!