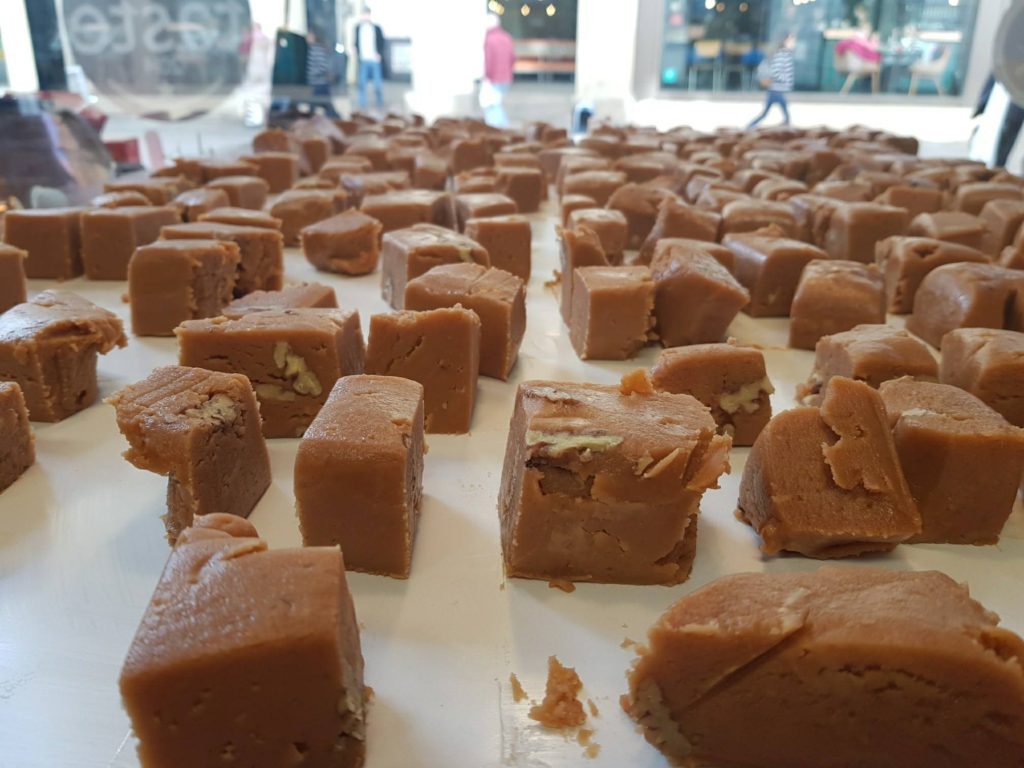 (Edit: We’ve updated this to be a lactose-free fudge, suitable for those with lactose intolerances!)

The lactose-free fudge comes in two flavours – Lactose-Free Salted Maple & Pecan, and Lactose-Free Maple & Cashew – and is fully accredited by the Vegan Society.

Since its release at the end of February, the new lactose-free range has taken the UK by storm, and is available in most Roly’s Fudge Pantries across the country as well as online.

How is it made?

Roly’s Fudge was established on a traditional family recipe that has been passed down through generations, made using artisan fudge making methods. We have always been proud of our fudge being made with real butter, milk and sugar, with all of our fudge pantries striving to source this as locally as possible.

Because of this recipe, the hallmark of Roly’s Fudge is our crumbly, melt-in-the-mouth fudge.

This was one of the most important aspects when considering how to make a lactose-free and vegan fudge flavour.

To get this right, we spent months experimenting and researching to make the perfect fudge.

The ingredients we settled on were organic soya milk and organic coconut oil, and we added finest cashew butter too.

Originally we planned to make one lactose-free flavour, but after finding two fantastic combinations, we decided to release both! 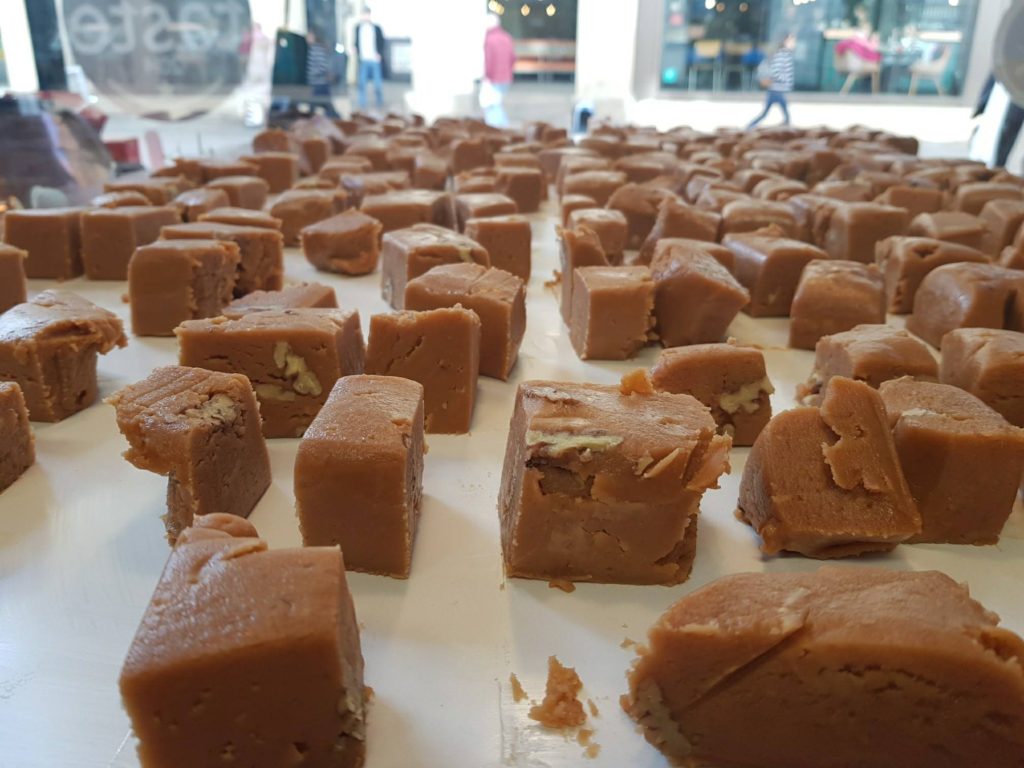 The first time we made our Lactose-Free-Free Salted Maple & Pecan vegan fudge!

We wanted this to be a fudge for everyone – so alongside making sure it stayed lactose-free by carefully making it in our Roly’s Fudge Pantries, we also wanted to make it suitable for vegans.

No accreditation is better than from the Vegan Society itself, so we worked hard to make sure all our ingredients were vegan friendly, from the sugar in all of our fudges to the maple syrup! We even researched into whether monkeys were used to harvest the coconuts in our organic coconut oil!

The packaging is brand new for vegan and LF flavours only, with a rustic buff brown and light green, using paper that is sustainably sourced. 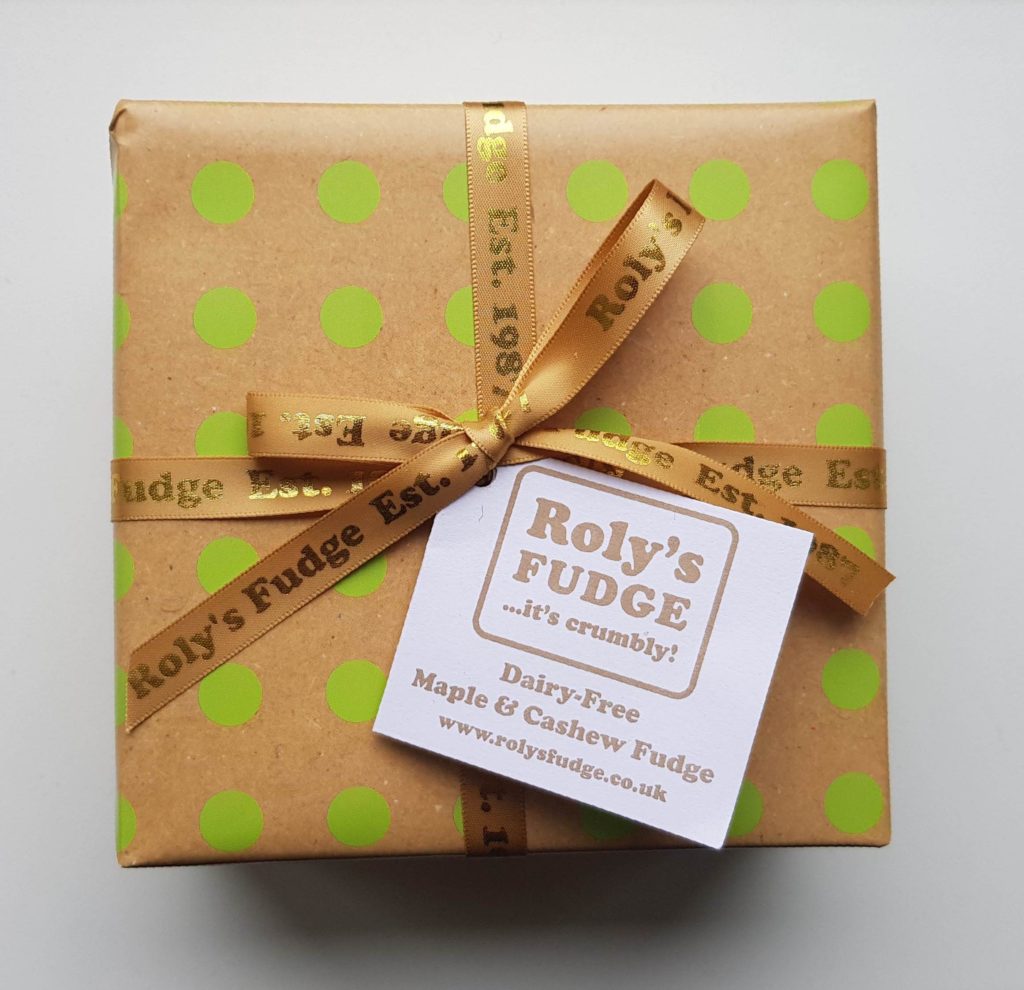 Where can you find vegan lactose-free fudge?

Shop local to you by supporting one of your independent owned businesses in the following locations:

If in doubt whether the fudge is in stock, you can call your local Roly’s Fudge Pantry on our Stores page.

If you’re not close to a Roly’s Fudge Pantry, you can shop online on our online store.

What are people saying?

We have been flooded by positive feedback on this new fudge range, and a testimonials page is coming soon with all our vegan press!

For now let’s leave you from words from one of our happy customers just this weekend.

“I’ve just had some of this and it is ABSOLUTELY AMAZING!” says Rachel Hill, known as @planted_powered_rachel on Instagram. “It is crumbly, a bit like tablet and the taste is out of this world”

😍😍😍 VEGAN FUDGE😍😍😍If you are in Plymouth then you need to check out Roly’s Fudge Pantry in the Barbican! @rolysfudgeplymouth It has two flavours of vegan fudge 😍 Registered with the Vegan Society – we bought this one today and I cannot wait to try it. ***Update – I’ve just had some of this and it is ABSOLUTELY AMAZING! It is crumbly, a bit like tablet and the taste is out of this world, if I could buy this online and have it delivered I would*** #saltedmapleandpecanfudge #veganfudge #rolysfudge #fudge #dairyfreefudge #handmadefudge #vegantreat #plymouthvegans #vegan #plantbased #poweredbyplants #plantpowered #thrivingonplants #forksoverknives #eatlikeavegan #whatveganseat #vegansofinstagram #veganism #veganlife #vegancommunity #govegan #vegantips #veganfoodlovers #veganpower #vegetarian #veganuary