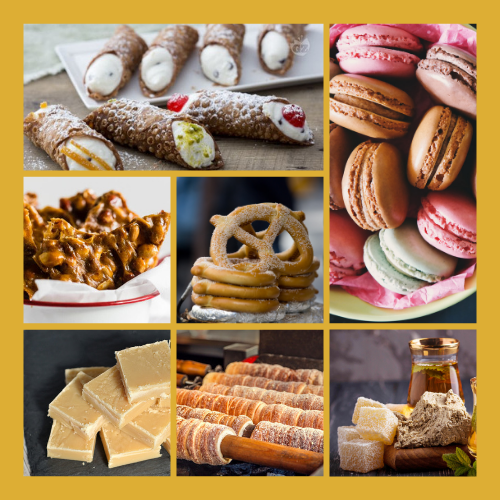 Treats around the world that are (almost) as good as fudge

Treats around the world that are (almost) as good as fudge

It’s no secret that we love fudge. That’s why we’ve been making it since 1987. Up and down the country, Roly’s Fudge Pantries line 42 streets of the UK towns, villages and cities, but we haven’t yet taken our fudge into international territory. This made us think about other sweet treats from around the world that are equally as loved by their home nation, as fudge is in Britain. So, we’ve compiled a list of treats around the world that are (almost) as good as fudge that you can enjoy abroad, or even as close as Scotland.

Let us know if you think we’ve missed your favourite, or if you recommend any we can try next time we are on holiday! 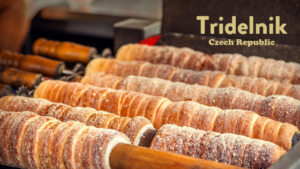 Often known as ‘chimney cakes’, this Czech treat is a crowd favourite. Not only do they look amazing, but they taste equally as good. Just like our fudge, Trdelniks are made in full view of customers so that everyone can see how they are made.

Essentially, this dessert is a thick dough (almost the texture of a doughnut) which is coated in sugar or cinnamon and then wrapped around a thick pole.

Each batch is slowly roasted over a fire until it becomes a crisp, brown colour and the sugar has crystallised. You can fill the cone with ice-cream or melted chocolate, you can also enjoy it plain.

We think our  Roly’s fudge sauce would go especially nicely with one of these! So next time you’re in the Czech Republic, have a try of a Trdelnik (and don’t forget to pack your fudge sauce!) 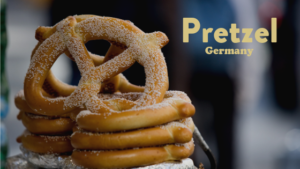 The Pretzel has been an integral part of German baking traditions for centuries. An instantly recognisable food owing to its unique shape, you can buy them from street vendors in Germany in either soft or hard form, and either sweet or salty!

However, the most common seasoning is salt (bit like how popular our Sea Salt Fudge is!) and in German tradition, they are baked like bread.

The pretzel means so much in German heritage that most bakeries have the Pretzel as their emblem. 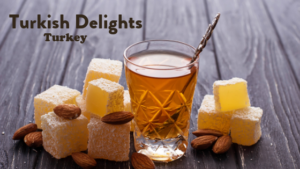 No prizes for guessing where this sweet confection comes from! Turkish delights are based on a gel of starch and sugar and contain various fillings.

Traditional varieties are flavoured with rosewater, mastic, Bergamot orange, or lemon, but like us, sellers mix it up with new flavours too! Chopped dates, pistachios, hazelnuts and walnuts are all popular flavours!

We already have a Maple & Walnut flavour, but maybe we’ll get inspired by the other fillings of this Turkish treat, watch this space! 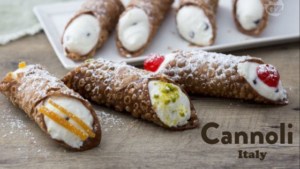 Just like Tridelnik, this Italian pastry is shaped like a tube, is coated in sugar and contains various fillings. Usually though, the filling is sweet and creamy, containing ricotta.

Originating on the coast of Sicily, this treat can be as small as your finger, to as big as your fist! Although typically the ends are dipped in pistachio, you’re likely to find variations dipped in chocolate chips or simply coated in sugar.

We think fudge crumbs would be the perfect dip for this treat! In fact, National Fudge Day and National Cannoli day are both on the 16th of June! So if you’re thinking of buying or making cannoli, come and visit our pantry to combine these two delicious treats. 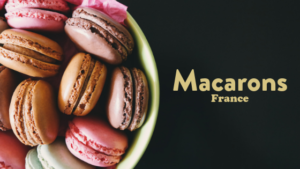 Commonly mistaken as ‘macaroons’, Macarons are French cookies with a meringue consistency.

They are made from almond meal and egg-whites and then sandwiched around a ganache, jam or creamy-based filling. French monks in Renaissance Venice were the first to create this cookie, although they were a much more basic version and not as colourful as the variations we get today!

The first mainstream recipe was published in 1651 and the first cookies that had a filling were sold in a bakery in Paris in the 20th Century. 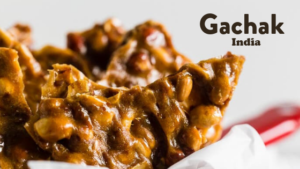 Peanut Gachak is a very traditional indian sweet which has many variations.

All of the ingredients in brittle in their basic form are relatively good for you – containing mostly nuts and seeds. It is a staple sweet in the festive season and is loved in both rural and urban areas of India. There have been adaptations of gachak, such as making it more caramel based and adding sweeter ingredients.

If you want to try it in the UK, you’re best searching for peanut brittle, as this is what western countries tend to call it, or you could try making it yourself! 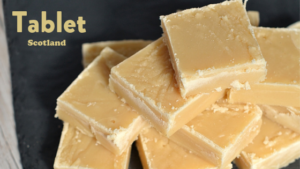 The Scottish tablet is probably the most comparable to our fudge; the ingredients similar (sugar, condensed milk and butter) and they look similar too. The difference lies mainly in texture.

Tablet has a brittle, grainy texture, whereas fudge is soft and crumbly (but you know that already from visiting our store!).

Each family has a slightly different way to make this sweet comfort food, but the taste doesn’t deviate a great deal.

So if you are ever in Scotland and miss your fudge fix, the tablet is the closest you’ll get to the same yummy goodness.

Most of these treats can only be found abroad, so until then fudge can be at the top of your comfort food list!

Come and visit your local pantry soon, you can find out where we are here.

If you really can’t reach us, then we also have an online shop with FREE delivery! Buy your fudge online here.