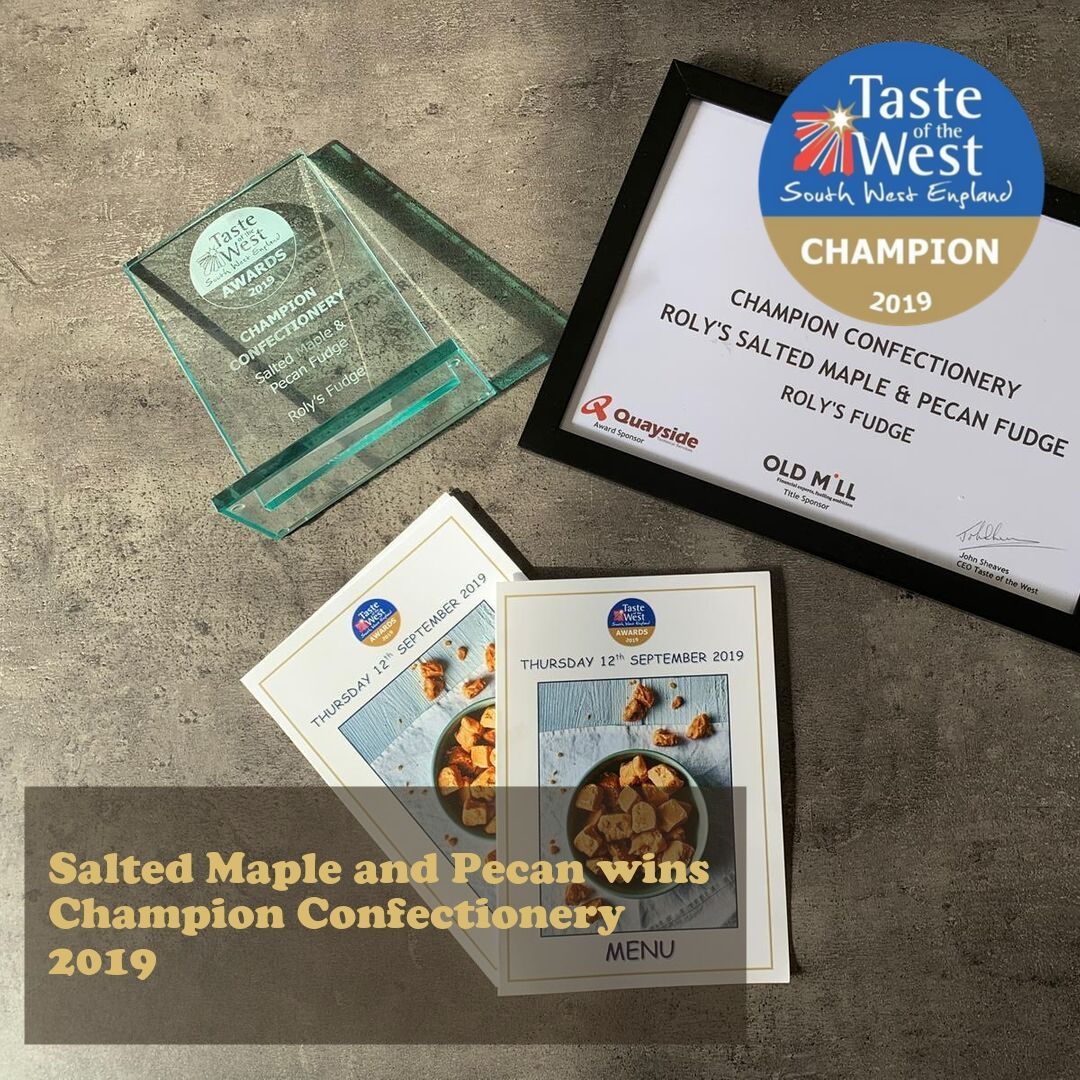 Roly’s Fudge was in both first, second and third place – with our very own Vanilla Clotted Cream and Coffee and Cream as our competition – but Salted Maple and Pecan came out on top.

Taste of the West is the awards body for the South West food and drinks industry, so the Champion Confectionery award for 2019 celebrates the very best South West confectionery product against hundreds of other entries.

Even better, this is our second Champion win for Salted Maple and Pecan, the first being in 2017. It is now our ultimate fudge flavour, having been the only confectionery company to not only win this award twice, but also twice on the same flavour!

Dannee, attending the ceremony this year as a representative of Roly’s Fudge, says: “It’s a real testament to this fudge flavour to be the ultimate confectionery product for two years. We also brought along the shop owners who made the first batch of this flavour several years ago – Matt and Shelley, who developed the recipe in the copper pans of their Polperro shop.

“The atmosphere was fantastic when the screen came up listing the finalists and only  Roly’s Fudge was there!

“We have a great relationship with Taste of the West and we’re looking forward to continuing to work with them closely to celebrate the best of food and drink in this pocket of the UK.”

This success comes after Roly’s exciting year of 24 award wins, including seven Taste of the West Gold awards earlier this year, which you can find on our awards page.

Coffee & Cream Fudge was recognised as a finalist for the first time, featuring indulgent roasted coffee beans swirled with the creamy natural texture of our clotted cream fudge. 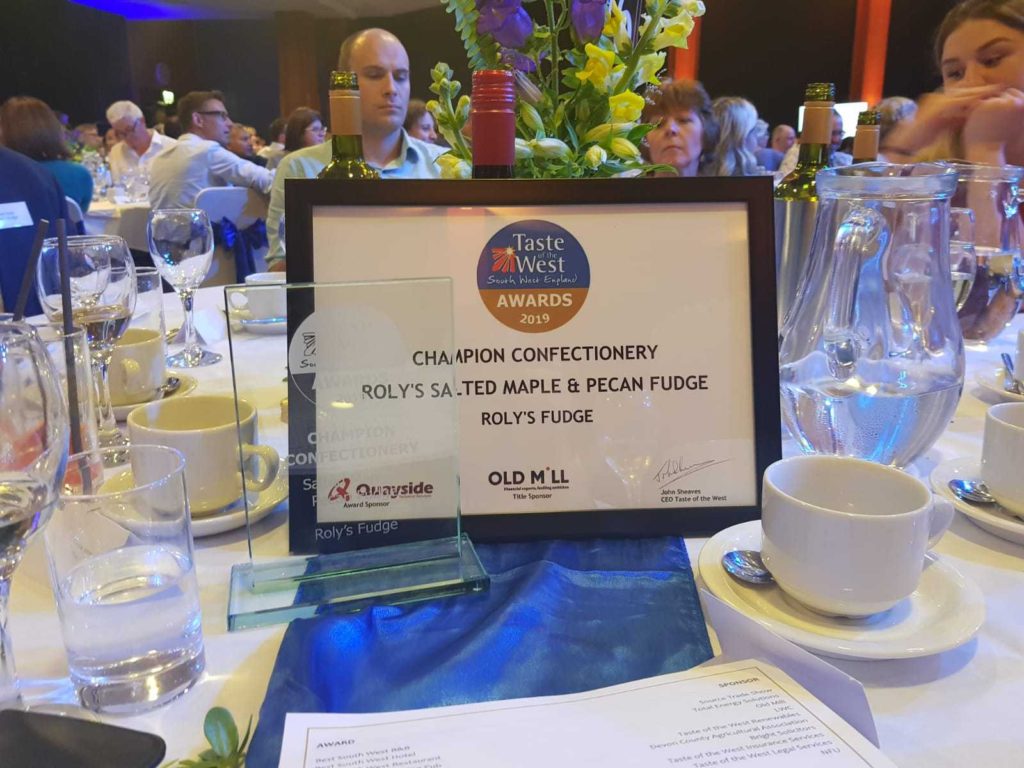 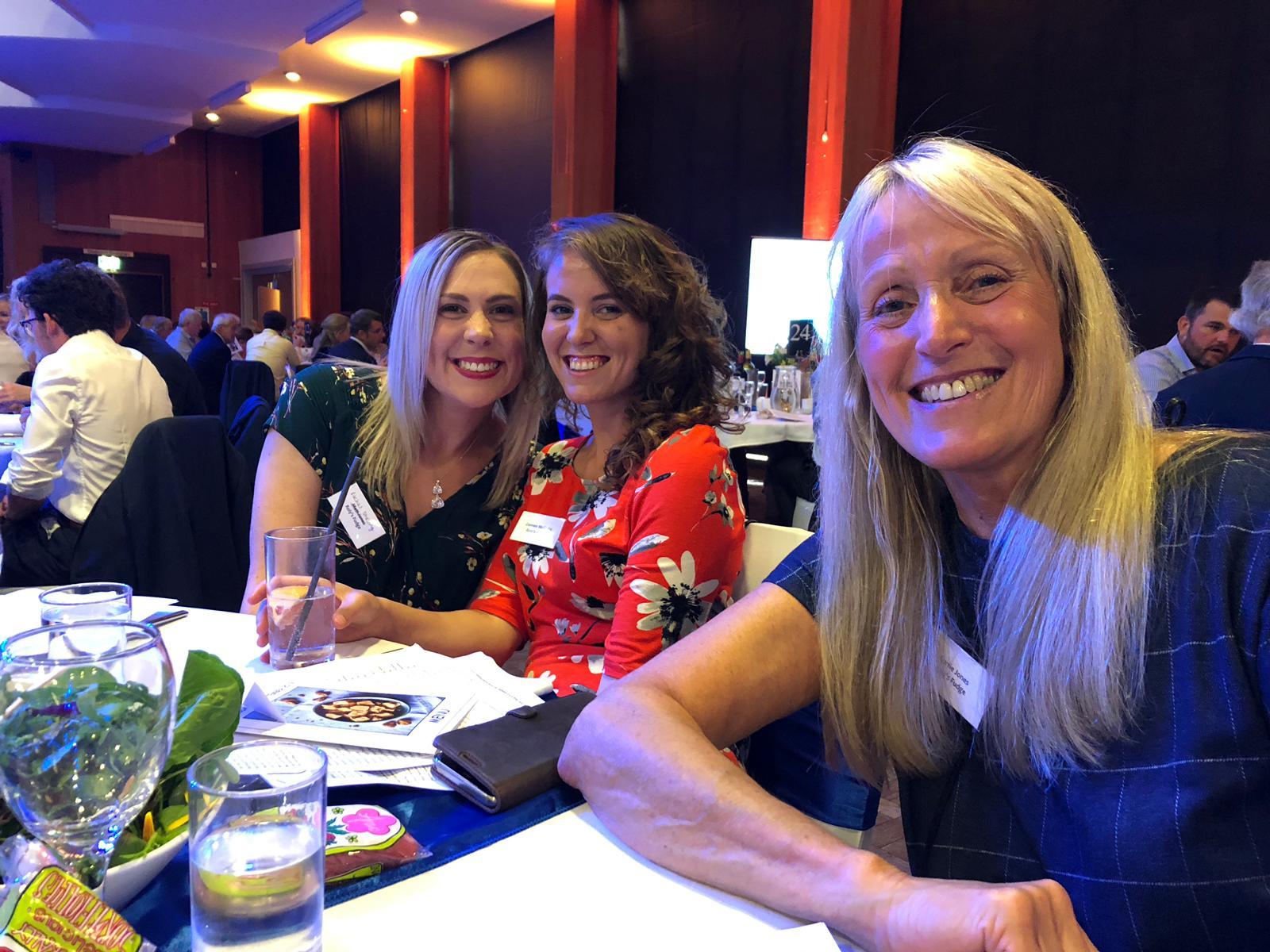 To determine the winner, the Taste of the West judges arranged a final round of judging to select the top scoring Golds in the Confectionery category.

Then, they narrow down their favourites to choose their Champion product in the class and ultimately the 2019 Supreme Champion across the Taste of the West Awards.

We couldn’t have done it without the support of our fudge fans, so thank you. If you would like to try our ultimate flavour for yourself, Salted Maple and Pecan is available in all Roly’s Fudge Pantries across the country!

Our awards total now comes to 67 and we hope there are more to come! If you want to see any of our other awards, please find out more.