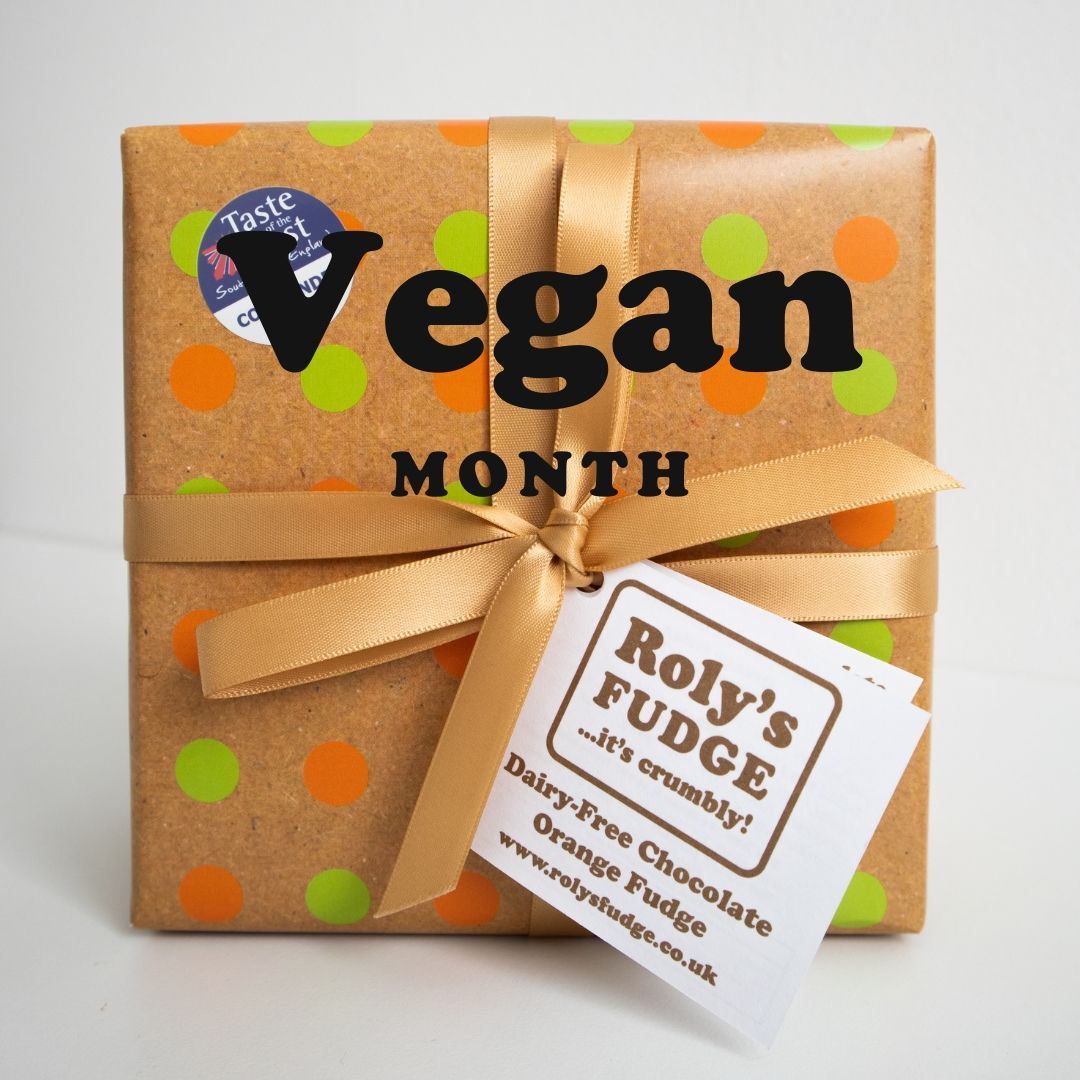 In honour of Vegan Month, this November, we have decided to take you back to the roots of our Vegan Fudge.

In this week’s blog post you can read all about the process we undertook to develop our award-winning and delicious Vegan fudge. Here at Roly’s we are committed to making the best crumbly, melt-in-the-mouth fudge you will EVER have, and we are always committed to the highest of quality for all our lovely customers; vegan, dairy-free or not!

To share the story of our Vegan Fudge, we need to take you back to the very beginning of Roly’s Fudge and our core values upon which the company was established. 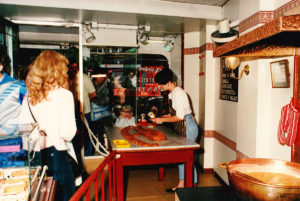 The roots of Roly’s Fudge

Roly’s Fudge began with a batch of Vanilla Clotted Cream prepared following a traditional family recipe that has been passed down through generations, made using artisan fudge making methods.

We have always been proud of our fudge being made with REAL ingredients, with all of our fudge pantries striving to source these as locally as possible.

Because of this recipe, the hallmark of Roly’s Fudge is our crumbly, melt-in-the-mouth fudge.

The texture of our vegan fudge was one of the most important aspects we had to consider when brainstorming our vegan and dairy-free recipe.

To get this right, we spent months experimenting and researching to make the perfect vegan fudge for you, so that no one had to compromise and miss out on our delicious fudge.

All of our dairy-free fudge uses nut butter to ensure uncompromised melt-in-the-mouth texture – so although we spent some time looking at making  vegan Vanilla Fudge, we realised we would need to embrace the nutty flavour as core to all of our flavours!

We were planning to do one ultimate Roly’s vegan flavour, which would be Dairy-Free Maple & Cashew. However, Dairy-Free Salted Maple & Pecan was made during a trial batch – and it was just too yummy not to introduce this to the Roly’s family as well!

At the end of 2018 due to demand we started experimenting on a third flavour to join the family – a Dairy-Free Chocolate Orange, with a distinctly different taste to the other two flavours. 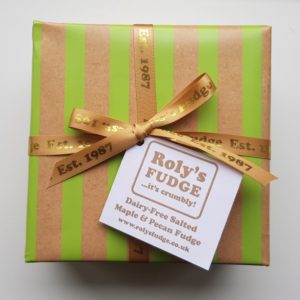 Getting accredited by the Vegan Society

Although all of our processes and ingredients were vegan, we wanted to go one step further and earn the ultimate mark of accreditation – through the Vegan Society, giving you all the confidence that our fudge flavours are fully monitored and vetted by the best in the industry.

This meant we had to meet many requirements while carefully sourcing our ingredients, making sure they involved no animals or animal products.

The process really made our Roly’s Fudge Pantries understand how even simple products like sugar and nuts may not be vegan. We even were asked to research into whether monkeys were used to harvest the coconuts in our organic coconut oil! 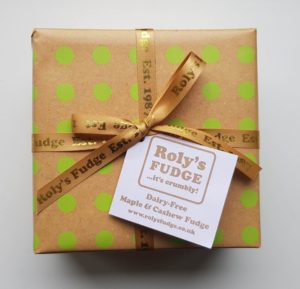 All about our ingredients

Not only did we make sure we met the Vegan Society requirements, we also insured to source the finest quality ingredients to produce our fudge.

In fact, we don’t have palm oil in our fudge, nor do we use colourings, additives, or artificial flavourings. When you indulge in any of our fudge you can rest assured you are eating REAL fudge with REAL ingredients.

After months and months of recipe testing, the ingredients we settled on as the base of our vegan fudge were organic soya milk, organic coconut oil and the finest cashew butter.

Since its release in early 2018, the new dairy-free range has taken the UK by storm, and is available in most Roly’s Fudge Pantries across the country as well as online.

Originally we planned to make one dairy-free flavour, but after finding two fantastic combinations, we decided to release both! These were the original two vegan fudge flavours: Maple & Cashew and Salted Maple & Pecan. In early 2019 we released a third Vegan Fudge flavour; Chocolate Orange. We don’t have any current plans to expand our Vegan range, however with the amazing feedback we get from our current range and the steady increase in people switching to a plant-based diet in the UK, we certainly won’t say never!

Our vegan fudge is easily spotted in our fudge pantries, with its bespoke packaging for vegan and dairy-free flavours only, with a rustic buff brown and light green, using paper that is sustainably sourced.

If you haven’t yet, make sure you pop into your nearest Roly’s Fudge Pantry to try some of our delicious Vegan Fudge.

We always love seeing your photos of our vegan fudge, so don’t forget to tag us @rolysfudge on Instagram, Facebook and Twitter! Don’t forget to use the hashtag #rolysveganfudge