Find out more about Shelley and Matt’s shops: 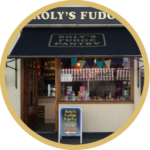 Find out more about Salcombe, the home of Salcombe Gin Fudge since 2014. >> 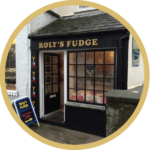 After the success of Salcombe, Matt left his supermarket job to open their second pantry in Polperro. >> 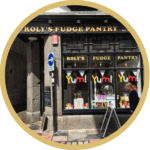 Discover more about Roly’s Fudge Plymouth, one of two of Shelley and Matt’s shops that opened in the spring of 2016. >> 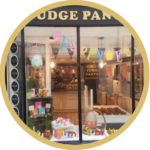 Roly’s Fudge Dartmouth opened in the same week as Roly’s Fudge Plymouth. Find out more about it here. >> 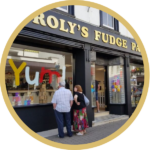 The fifth store for Shelley and Matt is Roly’s Fudge Looe – find out more about this Cornish fudge pantry! >>

Where do you own your stores?

We own 5 stores across the South West, in Looe, Salcombe, Plymouth, Polperro and in Dartmouth.

When did you open your Roly’s Fudge pantries?

Salcombe was our first shop that we opened in January 2014 followed by Polperro in 2015.

What did you do before moving to Roly’s?

Shelley was working part-time in Roly’s Fudge Totnes and I was a Supermarket Store Manager.

What is your earliest memory of fudge/Roly’s Fudge specifically?

When we always came down to Devon on holiday about 15 years ago and watching Roly’s Fudge being made in Totnes.  Shelley always bought loads to take back home!

“Every single customer that tries the new gin fudge cannot get over the amazing gin taste.”

What made you want to own your own pantry?

After Shelley had spent a couple of years in Totnes shop, she wanted a Pantry of her own.

We loved Salcombe and thought this would be a great location for a shop.

It was and so much so that I gave up my job at Sainsbury’s to open our second pantry in Polperro.

What’s your favourite part of being a Roly’s Fudge franchisee?

Being part of the fudge family.  It can be tough at times, but the whole business is so rewarding, whether that’s seeing customers reactions to our fudge-making or in developing our teams to be able to make great fudge or manage a shop.

Shelley is Vanilla Clotted Cream and mine is Salted Maple and Pecan.  Closely followed by Peaches and Cream.

“We enjoy trying to develop flavours and different fudges for customers.”

Do you have any stand-out moments or events you particularly remember?

Salcombe tends to be a celebrity hang-out.  We’ve had a proper laugh with Jack Whitehall’s mum and dad with Patricia Hodge (Miranda’s Mum) in the shop.

Jeff Banks wanting to take us to Japan! (Never happened, but he did come back in and apologise). Ken Barlow of Coronation Street, Caroline Quentin.  Tom Daley and his husband bought fudge too from Salcombe.

We help closely support Salcombe RNLI too, as they do a fantastic job.

Is there anything customers should look out for in your shop?

Every single customer that tries the new gin fudge cannot get over the amazing gin taste.

In Plymouth and Dartmouth we have fudge promoters who have Roly’s branded usherette trays giving out samples on the streets next to the shop.