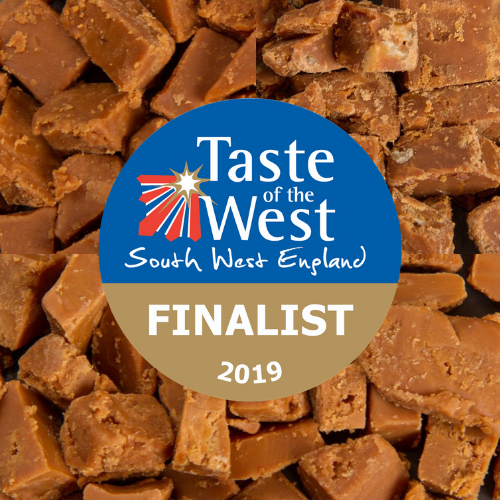 Exciting news! Three of our fudge flavours, Salted Maple & Pecan Fudge, Coffee & Cream and Vanilla Clotted Cream Fudge, have been selected by Taste of the West judges as finalists in the Confectionery class for 2019.

This news comes following our win of seven Gold awards earlier this year. The Taste of the West judges arranged a final round of judging for all food and drink products to select the top scoring Golds. Three Gold award winners in each class were chosen as Finalists.

In September, the judges will select the Champion in the class and ultimately the 2019 Supreme Champion across the Taste of the West Awards.

The Champion for each class will be selected at a special awards ceremony in mid September. In 2017, our Salted Maple and Pecan flavour won Champion, making it the top confectionery product at Taste of the West.

Vanilla Clotted Cream and Salted Maple & Pecan have both been finalists in the past. They have continuously made their mark in the history of Roly’s Fudge: Vanilla Clotted Cream Fudge has been our best seller since Roly’s Fudge began more than 30 years ago, whilst our Salted Maple & Pecan Fudge, even though introduced much later in 2015, has quickly become one of our top bestsellers in our Roly’s Fudge Pantries and online. This year, we are really proud that our Coffee & Cream Fudge has also been recognised as a finalist – although not as popular as our vanilla or salted varieties, you can’t beat the strength of the roasted coffee that goes into this fudge.

Question is, which flavour deserves to be the Champion winner for 2019?

Our awards total now comes to 58 and we hope there are more to come! Check back in September to find out how we get on.

If you want to see any more of our awards, press here.